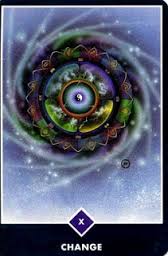 Commentary on the Card: The symbol in this card is an enormous wheel representing time, fate, karma. Galaxies spin around this constantly moving circle, and the twelve signs of the zodiac appear on its circumference.

Just inside the circumference are the eight trigrams of the I Ching, and even closer to the center are the four directions, each illuminated by the energy of lightning.

The spinning triangle is at this moment pointed upward, toward the divine, and the Chinese symbol of yin and yang, male and female, creative and receptive, lies at the center. 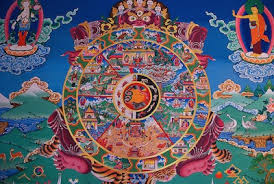 Meaning of the Card: Life repeats itself mindlessly–unless you become mindful, it will go on repeating like a wheel. That’s why Buddhists call it the wheel of life and death–the wheel of time.

One day, a fine morning, you are feeling so good and so happy, and another day you are so dull, so dead that you start thinking of committing suicide. 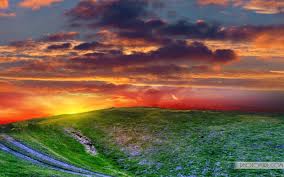 Wow! This card really spoke to me. My normal, even-keeled self, has been feeling pretty emotional the past few days . . . Euphoric and grateful one day; sad and disconnected the next.

The seasons are changing, our earth is changing, and it’s no wonder those of us who are sensitive have emotions which reflect that. As the saying goes, “As without, so within.”

In this time of change it is important to be gentle with ourselves, and make sure to take time for centering and self care. If you’re needing some extra support, a counseling and/or Reiki session may really help, and I would be delighted to assist you.