Jupiter in Leo is on the cosmic stage, July 16, 2014 – August 11, 2015. The biggest planet in our solar system transits through a sign for approximately one year. Now wrapping up its stay in the late degrees of Cancer, we’re witnessing a major crises concerning the moral, ethical and political issues (Jupiter) with respect to children (Cancer) from another country (Jupiter) seeking asylum (Cancer) in the United States.

After Jupiter enters Leo, on the whole we’ll see a shift from the focus on the emotional realm relative to issues regarding our responsibilities to family (our own, community or planetary), who and what we nurture, caregiving, security and safety, to a more individual and fiery preoccupation with our expression as creative beings asserting our individuality.

Jupiter represents expansion, gain and enlightenment. Known as the “greater benefic” in traditional astrology (Venus is the lesser one), it brings gifts of prosperity, abundance, generosity, joy and luck. Whatever Jupiter touches or is involved in, it makes things bigger. It’s a planet connected with the part of our psyche able to see the whole picture, get the larger view and make meaning out of our lives.

Jupiter is also associated with principles, laws, ethics, philosophy and storytelling as primary ways we make meaning out of information. It represents the journey we are on and our thirst for learning, teaching and traveling – areas which broaden our experience of the world.

In the Shamanic Astrology paradigm, Jupiter may not always be experienced as benevolent or good. As the planet representing a quest, its primary purpose is to assist us in reaching the goals of our own particular enlightenment path.

The Archetype of Leo

You’re shining I can see you
You’re smiling that’s enough
I’m holding on to you
Like a diamond in the rough ~Diamond in the Rough, Shawn Colvin

The Leo mystery school is focused on the development of radical, radiant self love, a strong will, and the self-confidence to be a leading player on the stage of life. Leo is the archetype of The King/Queen, The Central Figure, The Born Leader (by bloodline, decree), The Performer, The Star, The Icon, The Leading Man/Woman.

Leo is a “self interest” sign, and so we can see the out of balance manifestation as ego-driven control freaks, insisting their way is the only way. “I’m God and you’re not.” A good example of this can be seen in the Showtime mini-series, “The Tudors.” Jonathan Rhys Meyers brilliantly portrays King Henry VIII, a “competitive and lustful monarch,” the shadow side of Leo as a self-centered, arrogant, indulgent and tyrannical ruler.

Balanced Leo expresses itself as one who knows his or her connection with Divine energy, expresses this inherent power, and by way of example, shows or encourages others to embrace the same in themselves. “I’m God and so are you.” Our shining magnificence is our birthright to be claimed, not earned by dutifully living up to societal roles, expectations and external standards of being good enough. And, self love is mandatory for the ability to truly love another. For further exploration on the Leo Archetype, check out my past article on India Arie, a beautiful example of a healthy, balanced Leo expression: http://yourdivineblueprint.com/2010/03/29/india-arie-leo-archetype-of-radiant-radical-self-love/

Jupiter in Leo: It’s My Turn-It’s Your Turn 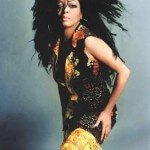 Jupiter in Leo-born Diana Ross, is a great example of how the big planet can express itself in this flamboyant sign. She was in her third Jupiter return cycle the year before she released “It’s My Turn” and “I’m Coming Out,” both in 1980. Astrologer Nadia Shah says we can expect to see Jupiter in Leo playing out this year with an icon coming out of nowhere (Jupiter will trine Uranus–sudden, unexpected–in September), that will be talked about and known worldwide. I’m looking forward to this surprise!

Whether you have a Jupiter/Leo signature in your natal horoscope or not, the invitation here is for each of us to fully get aligned with our hearts, our passion, our expression, our creativity. To embody our individual gifts and share them with others. To feel the joy of being and giving our unique selves. To celebrate our individuality. Take the wonderful opportunity being supported now, to shine your light and the deepest truth of who you are as a singular expression of the great Divine. The rest of us will be empowered to do the same!!!

Here’s a little/big video share for you to enjoy by musician George Michael, a “coming out” song, and a fabulous Jupiter in Leo exhibition:

Holly Alexander, MC, has passionately studied psychology, spirituality and the occult mysteries for over thirty years.